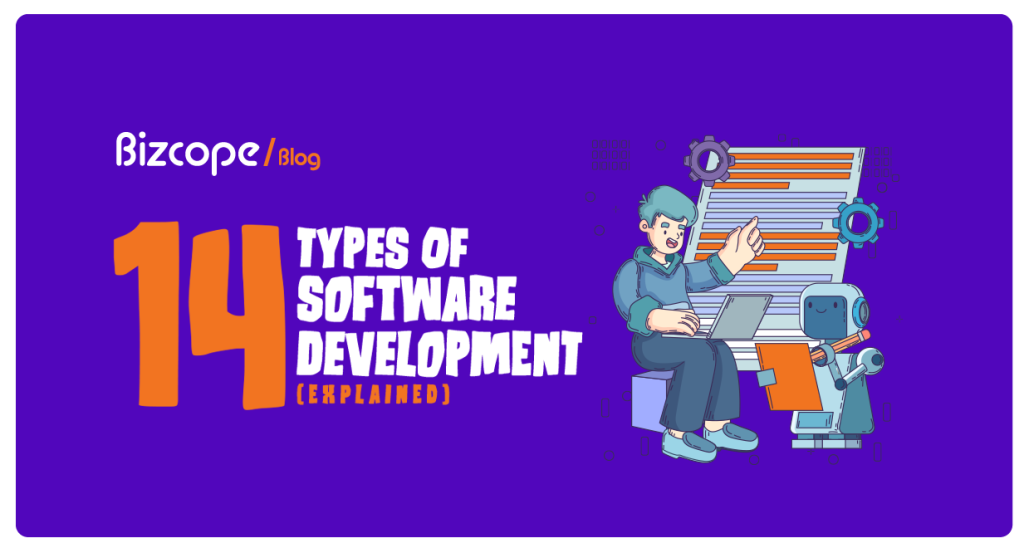 From web development to mobile app development and game development, each type of development requires a specific set of skills and tools. Additionally, many different types of developers may work together to bring your project to fruition.

It’s essential to understand the different types of software development and the expertise required before starting your search.

Web development is the process of creating and maintaining websites. This can include designing the layout and user interface, coding the front-end and back-end of the website, and implementing features such as e-commerce functionality or social media integration.

Web developers use a variety of programming languages and frameworks, such as HTML, CSS, JavaScript, and Ruby on Rails, to build websites that are both functional and visually appealing.

Mobile app development is the process of creating software applications that run on mobile devices such as smartphones and tablets. This can include games, social media apps, productivity tools, and more.

Mobile app developers use programming languages such as Swift, Java, and C# to create apps for different platforms, such as iOS and Android.

Game development is the process of creating video games for various platforms such as consoles, PCs, and mobile devices.

Game developers use a variety of programming languages and game engines, such as Unity and Unreal Engine, to create interactive and immersive gaming experiences.

Desktop Application Development refers to the process of creating software applications that run on desktop computers. This can include applications for various purposes such as productivity tools, multimedia editors, and gaming.

Desktop application developers use programming languages such as C++, C#, and Java to create applications that can be installed and run locally on a user’s computer. They also use various frameworks and libraries such as .NET and Qt to aid in the development process.

Desktop applications are often designed to take advantage of the powerful hardware and resources available on a desktop computer, and can range from simple single-purpose utilities to complex, multifunctional programs.

Cloud computing is the delivery of computing services—including servers, storage, databases, networking, software, analytics, and intelligence—over the Internet (“the cloud”) to offer faster innovation, flexible resources, and economies of scale.

Internet of Things (IoT) refers to the network of physical devices, vehicles, buildings, and other items embedded with sensors, software, and connectivity which enables these objects to connect and exchange data.

IoT has the potential to revolutionize the way we live and work by allowing devices to communicate with each other and with us, enabling automation and creating new opportunities for efficiency and innovation. IoT solutions can be found in various industries like healthcare, manufacturing, transportation, and smart cities.

Artificial Intelligence (AI) is a branch of computer science that aims to create machines that can perform tasks that would typically require human intelligence to complete.

Machine Learning (ML) is a subset of AI that focuses on the development of algorithms and statistical models that enable computers to learn from and make predictions or decisions without being explicitly programmed.

AI and ML are used in a variety of applications such as image recognition, natural language processing, and autonomous vehicles.

Virtual Reality (VR) is a computer-generated simulation of a three-dimensional environment that can be experienced through a VR headset. It immerses the user in a fully-realistic digital world, allowing them to interact and engage with the environment in a natural way.

Augmented Reality (AR) is a technology that overlays digital information on the user’s view of the real world. AR can be experienced through a smartphone or tablet camera or a specialized AR headset.

Both VR and AR are used in a variety of applications such as gaming, education, and design visualization.

Embedded systems are specialized computer systems that are designed to perform a specific task or set of tasks. They are often found in devices such as cars, appliances, and industrial control systems.

Embedded systems are characterized by their small size, low power consumption, and ability to operate in harsh environments. The software and hardware in embedded systems are tightly integrated, and the programming languages used are often specific to the task at hand.

E-commerce development is the process of creating and maintaining online stores and platforms for buying and selling products or services. This can include designing the layout and user interface, implementing features such as shopping carts and payment systems, and integrating with other systems such as inventory management and customer relationship management.

E-commerce development can also include creating custom solutions for specific industries such as real estate or healthcare.

Quality assurance (QA) is the process of ensuring that a product or service meets a certain level of quality. This can include reviewing and testing the product to identify and resolve any defects or issues.

Quality assurance is an ongoing process that is done throughout the development lifecycle. Testing is an important part of QA and it includes functional testing, performance testing, security testing, and other types of testing to ensure that the product is fit for its intended use.

Database development is the process of designing, implementing, and maintaining databases. This can include creating the database schema, writing SQL queries and stored procedures, and optimizing the performance of the database.

Database developers work with a variety of database management systems such as MySQL, Oracle, and SQL Server. Databases are used to store and manage data for a variety of applications such as e-commerce websites, social media platforms, and enterprise resource planning systems.

DevOps is the practice of combining software development and IT operations to improve collaboration and efficiency in the software development process. It aims to automate the process of building, testing, and deploying software, as well as to improve communication and collaboration between developers and operations teams. This can include using tools such as version control systems, continuous integration and continuous deployment (CI/CD) pipelines, and configuration management tools.

Cybersecurity is the practice of protecting internet-connected systems and devices, including hardware, software, and data, from attack, damage, or unauthorized access. This can include implementing security measures such as firewalls, intrusion detection and prevention systems, and encryption, as well as regularly monitoring and testing for vulnerabilities. Cybersecurity is an important aspect of any software development project, as it helps to protect sensitive information and prevent data breaches.

Each type of development has its own unique set of challenges and requires a different set of skills and tools.

We work 24/7 round the clock to satisfy our clients and help them to satisfy their clients. If you want to know how can we help your business just fill the form and click on Start Now button! One of our team members will call you shortly.