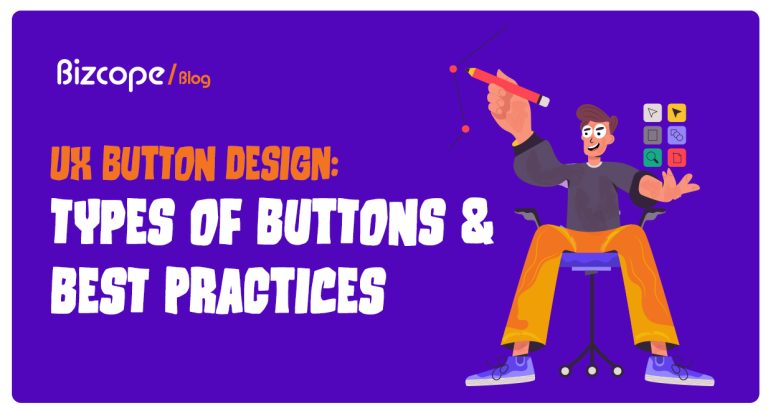 Most UX buttons are designed to grab the user’s attention and drive them in an appropriate direction. Buttons are often used as a call to action (CTA) that links to other pages to complete a decision or make a purchase.

So, knowing about button types, sizes, shapes, and placement is vital. Keep reading while we look at the most common types of UX buttons and the best button design practices to follow to keep your user journey neat and effective on your website.

The Importance of Buttons In UX Design

UX designers consider many factors when designing web and app interfaces, one of which is how users will understand various elements on the page.

For example, in the case of buttons, UX designers must decide what style of button to use and how to label it so that users will know that it is clickable.

Buttons can be made to look like traditional buttons, links, or other elements, and they can be labeled with text, icons, or both. The key is to choose a style and labeling that makes it clear to users that the element is intended to be clicked.

UX designers must also consider how the button will look when hovered over or clicked and how it will fit into the page’s overall design. By taking all of these factors into account, UX designers can create buttons that are both functional and visually appealing.

What elements does a button have?

UX designers consider many factors when designing buttons for websites and apps. For example, a button’s size, shape, and color affect how easily users find it and how likely they are to click on it.

In addition, the text on a button should be clear and concise so that users know what will happen when they click it. UX designers also consider the positioning of a button and the overall layout of the page or screen.

By taking all of these factors into account, UX designers can create buttons that are both effective and user-friendly.

The MIT Touch Lab has found that the average size for finger pads is 10–14mm, and fingertips measure 8 to 10 millimeters. This makes them a good minimum target touch area, meaning if you’re looking at designing an app or game, then these dimensions will give users enough space on their screens without feeling cramped while typing messages in text fields!

The Button Location and Order

Where should the buttons go? And what order should they be in?

There are a few UX design considerations to take into account when determining the location and order of buttons:

Buttons should be designed to stand out from the rest of the content so that users can easily find them and know they can be clicked on.

Considering these factors, you can ensure that your button placement and order are optimized for UX.

A Call to Action (CTA) button encourages a user to take a specific action, such as subscribing to a newsletter, downloading a file, or making a purchase. CTAs are placed prominently on a page or screen and often use color and/or text to stand out from the surrounding content. When designing a CTA button, there are several key factors, including placement, size, shape, color, and text.

By taking these factors into account, you can create a button that is highly visible and effective in encouraging users to take the desired action.

A raised button is a button that appears to float above the surface of the page. This type of button is often used to create a sense of depth and dimensionality.

A toggle button is a graphical control element that allows the user to switch between two states, such as “on” and “off.” UX designers often use toggle buttons to allow users to change settings or preferences.

For example, a user might be able to toggle a button to turn on or off a particular feature in an app. UX designers must carefully consider the placement and labeling of toggle buttons to ensure they are easy to understand and use.

In some cases, it may be helpful to use a metaphor, such as a light switch, to represent the function of the toggle button. Ultimately, the goal is to design a toggle button that is intuitive and efficient for users.

Ghost buttons are a rising trend in UX design. They’re called “ghost buttons” because they’re usually transparent, with just a border to make them stand out on the page.

The idea behind them is that they should be used for secondary actions that don’t need to be prominently displayed. For example, if you were designing a sign-up page, the ghost button would be used for the “already have an account” link.

That way, the focus is on the primary call-to-action (in this case, signing up), and the secondary action is not as distractingly visible. Ghost buttons can be a good way to declutter a page and make the UX more user-friendly.

However, it’s essential to use them sparingly and only for appropriate actions; otherwise, they can be more confusing than helpful.

The Floating Action Button (FAB) is a UX design element that allows designers to add an element of interactivity and engagement to their websites and apps. FABs are typically round buttons with an icon or text label that floats above the content on the screen.

When clicked, they can perform various actions, such as opening a menu, displaying additional information, or taking the user to another page. While they are often used for primary call-to-action buttons, such as “Add to Cart” or “Buy Now,” they can also be used for secondary actions, such as “Share” or “Save.”

Regardless of their purpose, FABs are designed to stand out and encourage users to take action. They can help improve the user experience and boost conversion rates when used correctly.

UX designers must carefully consider the type of button they use. Buttons serve different purposes, from allowing users to take action (such as “submit” or “add to cart”) to Navigation (such as “next” or “back”).

The type of button you choose should be based on the task users need to perform. For example, if you’re designing a form, you’ll want to use a submit button.

If you’re designing site navigation, you’ll want to use navigation buttons. However, the type of button you use will also affect the UX of your design. For example, a submit button on a form will help users understand that they must complete it to take the next step.

Using a navigation button on a site will help users understand how to move around the site. Therefore, choosing the right button type is integral to UX design.

The answer depends on your specific design and product or website goals. But, as a general rule, UX designers should consider functionality, visual hierarchy, and user expectations when choosing button types.

And remember to always test with actual users to ensure that your buttons are clear and easy to use. Happy designing!

We work 24/7 round the clock to satisfy our clients and help them to satisfy their clients. If you want to know how can we help your business just fill the form and click on Start Now button! One of our team members will call you shortly.